The Aztecs called it “the tree that hears”. Its large elephant-like leaves have all kinds of nicknames: tree with ears, caro caro, roach ear, or mulatto ear. The Guanacaste or Enterolobium cyclocarpum, this green giant more than fifteen meters high is recognizable between thousands. Do you feel the warm wind in its foliage? The heart of heritage beats to the rhythm of its strength and majestic beauty. A national emblem, this tropical flowering tree plays a fundamental role in Costa Rica. The properties of the Guanacaste tree benefit the local culture and the general balance of biodiversity. Savour its freshness and take a breath of air for a few lines. 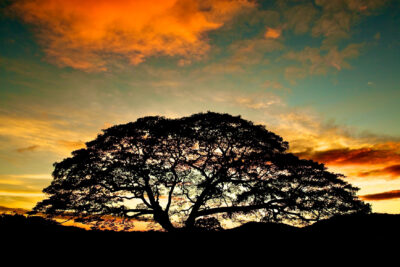 Imagine! You are facing a green colossus ten times higher than you. Its gigantic vegetable dome rests on a trunk 3 meters wide and only 2 meters high. A force of nature with short legs. The “ear tree” owes its nickname to the shape of its pods similar to… elephant ears. On the other hand, it is he who gives his name to the Guanacaste region.

In other countries like Venezuela, it grows to 50 meters. 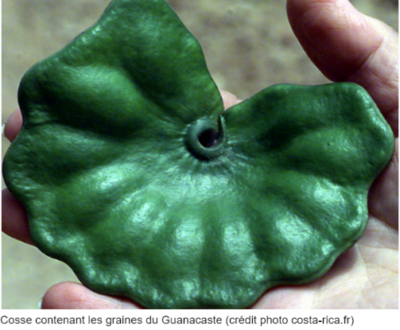 The phylogenetic classification ranks it among the Fabaceae (bean tree and flowering plant of the legume family). Before 2003, it was considered as a Mimosaceae. If it is common in the North Pacific, it is also found in Africa.

It produces its fruit between January and May and blooms from November to March. Its round white flowers look like pom poms with large stamens. Each gives birth to a famous ear which, in turn, will produce a dozen seeds, called pods. Its large leaves are themselves composed of bipinnate and sessile leaflets (without petiole). Aa a deciduous tree, it is naked in winter. He may live some seventy years. 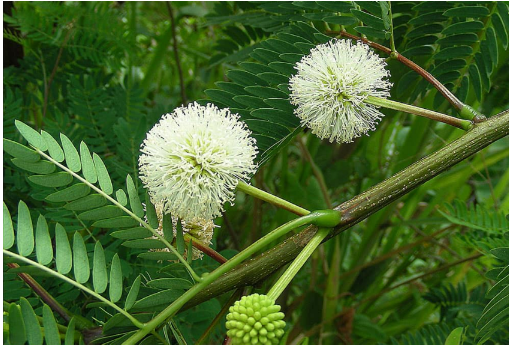 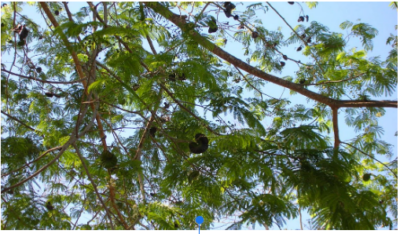 Where to see the Guanacaste tree?

The Guanacaste region hosts mangroves, Pacific coasts and heights culminating in the Rincon de la Vieja. But, it is in plains that we find the tree. A heavy drinker, it is always close to a source of water. To admire it, go to the surroundings of Playa Negra and Tamarindo or Santa Cruz. The Guanacaste Conservation Area includes 147,000 hectares of land and sea with diverse ecosystems. Nutrient-rich marine currents explain the exceptional floral productivity between the Caribbean and the Pacific.

Its tolerance to a large thermal range and its ability to absorb moisture multiply its presence in low-lying tropical habitats.

Emblem of Costa Rica since 1959

As a child of Costa Rica, Guanacaste was born out of a long-standing marriage. His name comes from the Nahuatl language, from the words “guautil”, tree, and “nacaztli”, ear. It became the symbol of the country after the province of Guanacaste decided to join the rest of the state. The decree number 7 published on 31, August,1959 formalizes the national tree.

And for good reason, he accompanies the Costa Ricans all day.

The Ticos cabinetmakers, who love this exotic wood of high quality, use it to make furniture. Light and water resistant, it is very popular for shipbuilding (canoes). Its large size makes it easy to cut large panels. Boats, tables and chairs in Guanacaste are renowned for «lasting a lifetime».

Therefore, it is the ideal building wood! A little too much, maybe because it is more and more victim of its success. Enterolobium cyclocarpum is now considered a threatened species, according to the CITES program, supported by the World Tropical Timber Organization and the Collaborative Partnership on Forests.

Among the Mayans, it is now forbidden to cut.

A figure of ethical craftsmanship

Would you like to bring back a local picturesque jewel? Artisans thread, like pearls, the black lugs and make necklaces and earrings. About the same size as a walnut, they are decorated with a light brown edging.

Costa Ricans produce their laundry based on Guanacaste seeds, known for their cleaning properties. They add the bark of the crushed and fermented trunk. Like the fruit, it contains tannin which is used to make soap.

It also dries the leather.

The green seeds, after boiling, can be found in the typical Costa Rican plate. Mexicans grill them like popcorn. The nectar is drunk in fruit juice.

The sap serves as a natural adhesive. Chewed, it serves as gum.

The natives, especially the Mexicans, found it to have medicinal virtues (bronchitis, flu and diarrhea).

You will find them in local organic shops, examples of ethical and fair trade. Buying souvenirs in these short circuits is also ecotourism.

Guanacaste: the tree with ecological properties

An undisputed model of ecosystem preservation, the Guanacaste region is a symbol of biodiversity. 7,000 plant varieties, following UNESCO. The tree, the Guanacaste, like every living species on Earth, plays a major role in its environment. Among other things, its ability to fix nitrogen also improves soil fertility.

Its spherical crown protects from the sun a very large surface on the ground. Due to its shape, it is also cultivated to be used as an umbrella. It houses coffee plantations and livestock fodder. Incidentally, some nature-loving tourists looking for a few minutes of rest. You, perhaps?

The seeds only start to grow if the protective shells are perforated. Thus, nature prevents early germination.

Guanacaste seed feeds animals in the forest. Birds are fond of it, including the Yigüirro, a small brown bird, another symbol of Costa Rica.

Only cattle (horses, goats…) can chew and digest fruits from Guanacaste.

Like other deciduous or semi-deciduous species, the Guanacaste tree delays the production of its fruits as much as possible. Nine months allow them to ripen in the rainy season. The goal? Let the roots settle and capture the water before the dry season: El Niño.

If you want to learn more about the intelligence of biodiversity, our article on the canopy may interest you. We recommend the book The Hidden Life of tTees by Peter Wohlleben, a German forest engineer and writer. You will discover a formidable inter-specific communication network and in particular the role of the roots in the transmission of information. We then understand the importance of the density of the plant, and especially of the low plants.

June 15 : National Tree Day in Costa Rica. This decree is dated May 25, 1915. Alfredo Gonzalez wanted to make men aware of the fragility of wooded surfaces. Authorities are urging people to plant a tree to limit global warming. They absorb and retain water, release oxygen and capture carbon dioxide.

The Guanacaste tree multiplies properties. A pillar of the landscape and culture of Costa Rica, it is also a true economic actor, fervent participant in the life of fauna and flora. Legend has it that Guanacaste even serves as a link between the world of the living and the afterlife. He shares the image of Costa Rica with the quetzal, the subject of our next article.

I want to meet this iconic plant figure, I contact Sylvain for a trip to the heart of biodiversity.